Regata of the witches

On Three Kings' Day, the grannies with a beard are sailing on the Canale Grande, the winner gets a stocking filled with candy

It was one of the worst flights I've ever experienced. Fifteen minutes before landing the winds of Chukotka hit us and began to play with the plane like with a toy. Imagine sitting in the mixer, the machine was throwing us up, down, right and left. I was sure I would faint or vomit. And indeed, when we got safely to the ground, one woman fainted, few green passengers remained on their seats breathing heavily and my knees were shaking so badly I almost fell on the stairs.

The Feast of Epiphany also known as the Three Kings ́ Day celebrates the revelation of God to man. It commemorates the visit of the three Wise men to the Baby Jesus shortly after birth.

According to the Italian legend, when on the journey to honour a new-born they got lost. They stopped at the house of an old woman and asked for directions. They also invited her to come along but she was too busy cleaning and refused. Later she saw a bright light in the sky and regretted her decision. She prepared a basket of delicacies and began to search for a baby but she never found him. She asked and asked people but in vain. And so to these days she is wandering around the world and searching. On the eve of the Epiphany she pops to every house and leaves sweets for children hoping that Jesus will be one of them.

This old lady is called Befana and in Italy she has similar role like St Nicholas, Santa Claus or Mikuláš in other countries. Awaiting her visit, on the fifth of January Italian children hang their stockings on the fireplace or window and prepare a plate of fruit or a few morsels of food and a glass of wine. Befana flies on a broomstick over the roofs carrying a bag full of gifts and comes down chimneys to deliver them. The children who have been good all year round get stockings filled with sweets and toys while the disobedient ones get lumps of coal (to tell the truth, it is a black rock candy). Befana refreshes with some food and wine and then addio, she has plenty of homes to visit. (Many people believe she sweeps the floor before leaving – which means she sweeps away all the problems of the year).

According to another legend, she is old and nasty because she represents Mother Nature, which has released all her energy throughout the year. Now she is exhausted and tattered and she can't wait to be burnt so that she can rise again from the ashes as a young, beautiful, fertile spring. Actually, the strawy figure, embodiment of the old year is burnt on this day in many places in Italy.

The Feast of the Epiphany represents the end of the holiday season and various events are going on in different cities. In Venice, there is the traditional Regata delle Befane that has been taking place since 1978. It is a special race among the members of the Bucintoro Canoeing Team. On the 5th January, around fifty men over the age of 55 would put on an old dress, apron, wool cap, pointy hat and a big nose and compete in the Canale Grande. Halfway through they would be joined by other boats carrying volunteers dressed as the red-suited Babbo Natale or other famous figures. There is a big filled stocking hanging from the Rialto Bridge awaiting for the winner. The Epiphany in Venice means not only the end of Christmas but also the beginning of the rowing and carnival season.

There was a strange atmosphere in the city. Maybe only for me because I have never been to Venice so early in the year. While in front of San Marco's Basilica there was a Christmas tree yet and the streets were decorated with Christmas lights, some shops were already adorned with carnival masks. Soot-covered Befanas hang on chandeliers in the restaurants, smiled from shop windows and sat down between the handbags. I even met a real one in a black dress on the San Marco Square.

The regatta was supposed to be held at 11 am, but surprisingly at 10 am when I walked around the bridge it was already crowded with people from different countries.

I started writing this blog especially to let you know what to expect, what is worth to see and what to avoid - because some feasts are described as the biggest events in the Milky Way Galaxy but you go there and nothing happens. And vice versa.

This was the first case. ,,Masked fleets” were represented by four gondolas. You read correctly, FOUR.  Witches had long skirts and caps, no noses. They didn't even row for 15 minutes. They didn't even start to sweat and it was over. I didn't see any enthusiasm, these four men looked as they were forced to do it as it was promised on the Internet. And I didn't meet the girls who were supposed to distribute hot chocolate, mulled wine and sweets on the bridge.

I asked local people about the previous years and they tried to convince me it was always a mass action. Did I have the ,,luck” to be there during the bad year? Well, I don't think so. Maybe it’s all about advertising, you need to know how to sell yourself or your homeland. Think about the Loch Ness monster, Moai statues or Montezuma's treasure… Did you notice that some countries have more interesting monuments, more mysterious legends and more crazy feasts than others? Or do they?!

I have my theory. Once, when I was walking in Bratislava downtown I saw a group of Italians standing by Čumil statue, the chap poking out of a manhole. It was installed in 1997 as part of an effort to embellish the capital damaged by communist architecture and quickly became the symbol of the city. The usually loud Italians were standing there, looking stunned; and with googly eyes listened to their guide – also an Italian. They looked like fanatical crowd just before deciding to commit mass suicide. They devoured every word he said like chocolate.

Curious, I came closer and understood. The guide was explaining to them why the statue was built. He had more fantasy than Dänikken. I learnt that during the Second World War partisans were hiding in Bratislava's channels and one of them was particularly brave. When someone was in danger he emerged from a canal discreetly as a ghost (as long as the sewer ghost could be discreet) and hit/stunned/ killed a dangerous fascist and saved an innocent victim. The citizens of Bratislava didn't forget his bravery and dedicated him this monument.

I didn’t tell Italians the truth but since then everything is clear to me. Do you think somebody really saw a Loch Ness monster? Bah! Nobody ever, but how many people go there with the intention to see her in the muddy waters of the Loch Ness lake every year! Do you believe that someone has ever disappeared in the Bermuda Triangle? Are you really convinced that some aliens from the forty-sixth galaxy came here to carve the mysterious drawings on the Nazca plateau? That Atlantis existed? Bah!

This is simply the active development of tourism! We have a lot to learn!

By the way, did you know that yesterday at midnight the White Lady walked through the Hviezdoslavovo square?

Venice has an array of benefits for the soul tired of winter, but is deadly for a wallet.

As compensation for an abortive regatta I bought at least a beautiful necklace of Murano glass... 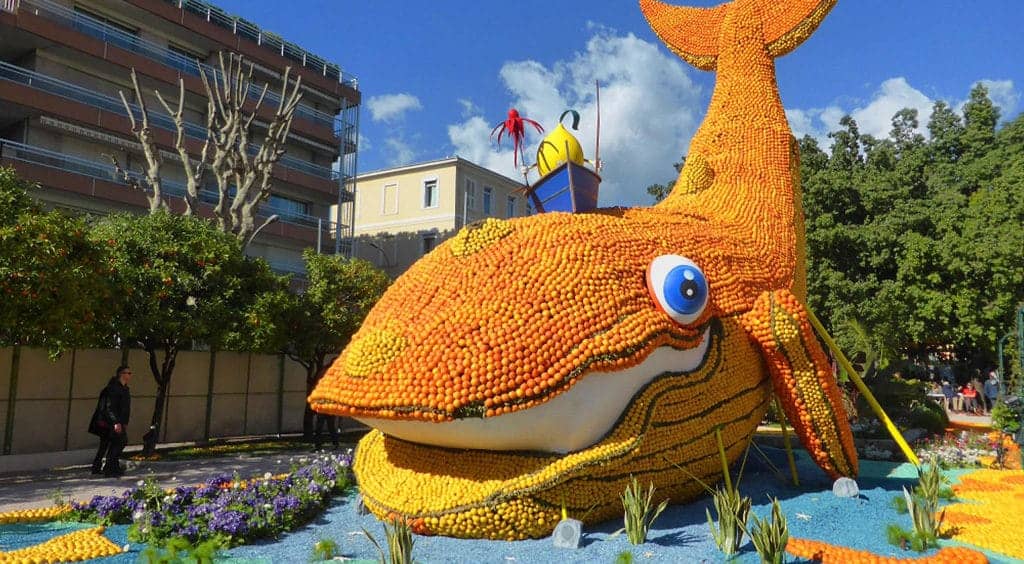 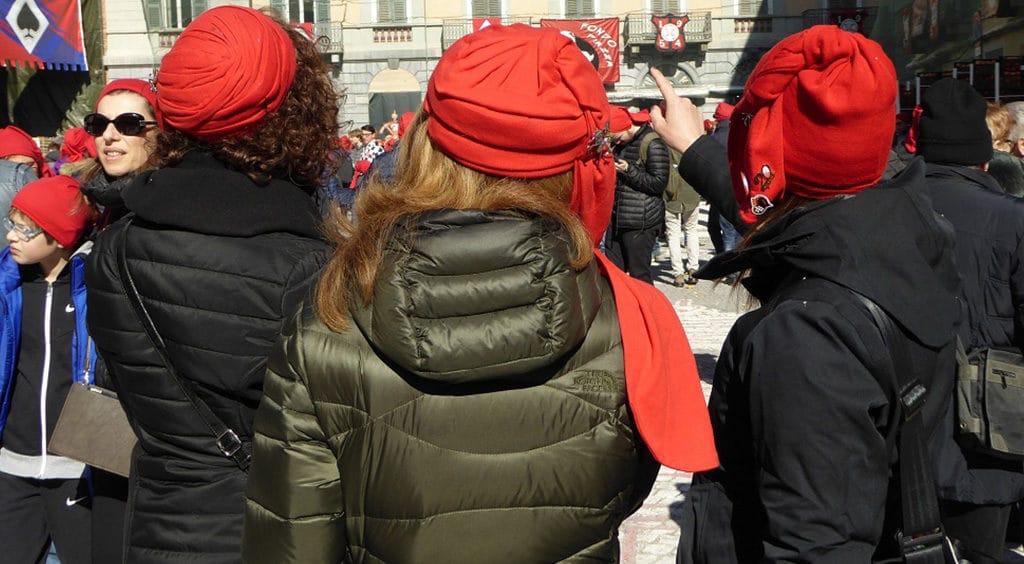 The Carnival of Ivrea and the Battle of the Oranges

To avoid getting a citrus between my eyes, I put on a mandatory red cap in which I looked like a Smurf 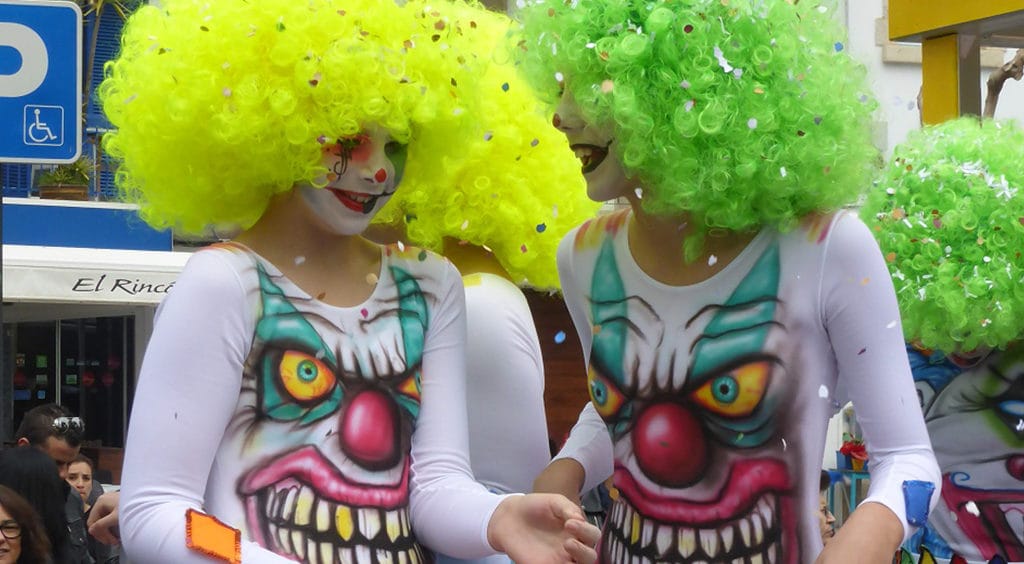 The Catalan carnival has a stunning atmosphere, there are parades, bed race and maybe you will see Elvis selling the olives…